It’s hard (for me at least) to start talking about any aspect of musical theory without talking for an hour or writing several thousand words and/or producing many diagrams. So I’m going to try and just provide some vignette posts, little moments of insight in a hugely complex field of study.
Here let’s look at the harmonic series (the pitches that emerge by multiplying a frequency by the set of integers (1,2,3,4 …) and its relationship to 12-tone equal temperament (the ‘standard’ division of the octave into 12 equal divisions).
The following diagram courtesy of the incredible programmer Dean McNamee (and Mathematica) shows how the pitches generated through the harmonic series differ from 12-tone equal temperament. The X-axis names the harmonic number (ending at the 20th harmonic) and the Y-axis is the deviation from the nearest even-tempered note (where for example -0.2 is 20% of a semitone flatter than equal temperament). If you look carefully, you’ll see that the fundamental and all the octave equivalents (harmonic numbers 1,2,4,8, 16 etc.) align perfectly with the even-tempered equivalents. In fact these powers of 2 are the only point where the harmonic series meets up (exactly) with 12-TET. These points are circled in red below.

The ‘non-octave’ harmonics are indicated with different coloured arrows (showing in which way they differ from equal temperament). The 3rd harmonic (indicated in orange) is about 2 cents (a mere 2% of a semitone) sharper than the equal tempered equivalent (a perfect 5th), and so of course are its octave equivalents the 6th, 12th, 24th etc. The 9th harmonic is about 4 cents sharper (as it is ‘affected’ by two 3rd harmonics), and is indicated with 2 orange arrows. This ‘stacking’ (and unstacking) of the 3rd harmonic is what is used to create the Pythagorean scale, also known as a 3-limit scale, since we only allow the 3rd (and 2nd) harmonic as tools to reach musical notes.

The 5th harmonic is significantly flatter than the 12-TET equivalent (and the cause of the many historical temperaments that have emerged in polyphonic music. The 10th harmonic has the same ≈14 cents discrepancy. The 15th ends up about being 12 cents flatter, since 15 = 3*5, it uses the 3rd harmonic (which makes it ≈2 cents sharper than 12-TET) and the 5th harmonic (≈14 cents flatter) resulting in an overall drop of about 12 cents (note the contrary orange and yellow arrows). Incidentally, the use of the 3rd and 5th harmonic (together with the trivial 2nd harmonic), creates the 5-limit system of tuning, with its extensive and beautiful use in Hindustani music.

You’ll see that the other prime-numbered harmonics get their own coloured arrows (7th=green, 11th = blue, 13th = purple etc.). The 11th is about as far from 12-TET that is possible, which is why Harry Partch stops there in his 11-limit 43-note universe. Since the primes never end so the harmonic pathways of tuning are (theoretically) endless.

Another way to see the relationship between the harmonic series and 12-TET is to visualise the harmonics resting at points on an infinitely expanding spiral. Each sweep of the spiral represents an octave, and the 12 equally spaced slices of the octave pizza represent each 12-tone slice. This has the advantage of indicating where in the octave each harmonic lies, as well as the octave relationships between sets of harmonics (e.g. between the 3rd ,6th, 12th and 24th harmonics  etc.). Here’s a beautiful rendering by Skye Lofander (whose website musicpatterns.dk has many awesome visualitions of musical concepts and is highly recommended). 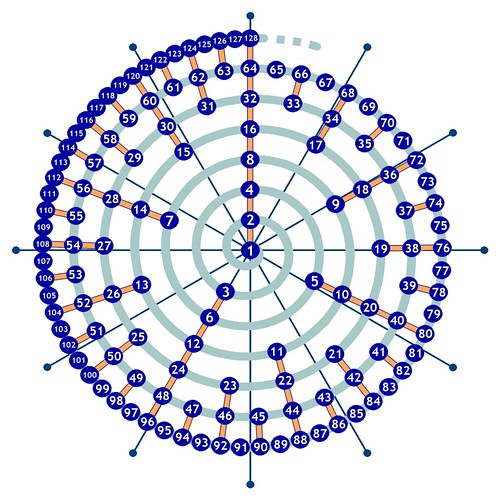 You’ll notice that the harmonics get closer and closer together, and essentially ‘sweep’ through the 12-TET discrepancy in an ever (but never completely) flattening upward slope. Here’s Dean’s rendering which shows the same phenomenon emerging with the first 500 harmonics: So along the way the 12-TET and harmonic series will get ‘close enough’ most certainly for human perception (which is a couple of cents on a good day) and acoustic instruments (which waver considerably in temperature and human execution). Even a slight head-turn will invoke enough doppler shift to make fractions of a cent meaningless in real terms.

So which is ‘better’ 12-TET or tuning derived from the harmonic series (also known as just (i.e. ‘true’) intonation)? And what incantation of the harmonic series is more ‘pure’? Is 4 jumps up the 3rd harmonic more ‘natural’ than one jump up the 5th harmonic? They both roughly approximate the major 3rd (the first a ‘Pythagorean third’ ≈8 cents sharper than 12-TET, the second a ‘just 3rd’ at ≈14 cents flatter). Some have attempted a measure of harmonicity (see Vals and Monzos), but its relationship to subjective experience is sketchy at best. Can one think of 12-TET as existing way, way up the harmonic series (so still harmonic), is it a ‘good enough fit’, or wholly incompatible with the harmonic series? What’s inate and wha’t encultered? Why 12 equal divisions and why not some other number? Just intonation enthusiasts can get heated about its superiority to 12-TET, but there is no doubt that the limiting of notes to 12, close-to, or exactly evenly-spaced has led to the creation of countless, otherwise impossible, musical creations and activities.

The best answer is that they are different, and both available to every composer, get over it, embrace and enjoy.

P.S. this was 3 times longer than planned. Apologies.

One very obvious way to illustrate the difference between the harmonic series and the equal division of the octave is by letting the frequency ratio 1:2 be represented by one winding of a spiral.

I made a diagram at the following link: https://flic.kr/p/w1e7AV

This is very true to the natural strcture of music: By one turn of the spiral you arrive at the same position at a new level, which is essentially what the octave is all about in music (and we are so frequency/time fixated … all this also applies for the space aspect of tone – the wavelength).

So, the equal division is similar to the hour positiions of the clock, and that looks appealing to the eye, but actually the organic, logarithmic division of the harmonics are more pleasant to the ears.

One thing which is readable at a glance is, that the deviation between 12-tet and perfect fifth (harmonic #3) is not very significant. The deviation between 12-tet and just major third (harmonic #5) is far more serious business and also disturbs our relation to the just intervals minor third (ratio 5:6), minor sixth (ratio 5:8) and major sixth (3:5) which are far more pleasant than their 12-tet counterparts.

Hey Skye, thanks for the message. Yes I love spiral relationships and yours is absolutely gorgeous. May I embed with credit in the post?
One thing that would be good to see (although it might get messy) is to show vector relationships between non prime harmonics. So you could have a ‘5th harmonic vector’ which connected 3 to 15 and 4 to 20. 15 would also have a 3 vector from 5. In that way we could see the ‘harmonic pathway’ to a harmonic and primes would have none.

I would be honoured to see the spiral here.
In my first freehand sketches of the spiral (it took my some years to realize I wasn’t the first to come up with the idea), I included what you call vector relationships but I gave up because it became too packed. Maybe it can be solved in an elegant way.
By the way: Thank you for – as always – enlightening post!

Great thanks, and thanks!
I was trying to keep my posts, but as you know music just unfolds endlessly. Perhaps we/you/I could look at vector relationship in just the first 30 or so harmonics. Incidentally if you’ve not seen it yet check out attempts of measuring harmonic distance (benedetti, tenney, monzos etc) beautiful/mind blowing.

Hi folks – I also have an interactive spiral online harmonic exploration tool at:

At the bottom, you can use HTML5’s audio support to play some of these tones. At some point, I could make a little sequencer or something.

One of the sticky little problems with intonation theories is that there’s a lot of theory without a lot of actual music to listen to to back the theories up with. I’m associated with the american festival of microtonal music which has been putting on concerts about three times a year since 1981. The AFMM also has a series of CDs taken from concert recordings which you can listen to. http://www.afmm.org .

Hello Mr. Lowengard,
Thanks, interesting to meet you here!
I found your program through the Xenharmonic project which is really impressive, and I introduced it to the international community of overtone singing enthusiasts where this is very useful on both a practical and theoretical level.
I really appreciate what you have presented, as I truly believe this infographic pattern has a huge potential to ease and deepen our understanding of music, so if you ever consider to update the interface so that each partial can be played by mouse click or finger touch you have my wholehearted support!
I envision a next step in development of something more playable and inviting to direct interaction – picking instrument and pitch by choice of simple clicks and maybe even including a learning game!?

Thanks, Skye! The playing part could be extended, clearly, to run directly from the diagram, and I’d also like to put together some kind of sequencer so that a series of intervals could be transformed with new tunings and modes.

I’ve always been surprised that this spiral depiction of harmonics isn’t used all the time. I’m in the middle of updating my iPhone apps which are also “any intonation” friendly. I still have a lot of work to do because Apple’s iOs is a moving target!

Actually I mentioned my request to a programmer friend some months ago. He is – as I suppose most programmers are – very busy, so I didn’t urge him too much to make a playable diagram but then we talked for half an hour on Skype and less than an hour later I heard from him again, that he had made a ‘proof of concept’ and actually it is pretty close to my vision. Alas I gave him a diagram with an eror at partial #3 and I haven’t heard from him since that. Maybe he will be back with a more inclusive version some day. I believe it is okay to show his work here. His name is Marco.
http://output.jsbin.com/yefeya/2

Hi Skye & Milton:
I got around to updating the tone spiral so you can monophonically play the tones directly. It’s not too happy with polyphony, using HTML5 Audio. But it’s not too bad!

I really enjoyed this. Im working on a project about the harmonic series as it relates to playing an instrument. I’m very curious as to what how many cents each discrepancy occurs. For example, how many cents are those prime harmonics off? I would like to see a list as I can’t really ever come to a conclusion as to what these pitches are and I honestly don’t know the calculus behind determining the frequencies for Equal Tempered or Harmonic. Would you be able to tell me how many cents flat and sharp each pitch is? Please?

Sure. As compared to equal temperament the 3rd harmonic is about 2 cents sharp, the 5th harmonic 14 cents flat, the 7th harmonic 31 cents flat, the 11th 49 cents flat (where most just intonation systems stop). Stacking/unstacking and combining these will create combinations of these ‘deviations’ from equal temperament. You can find a list in many place, including wikipedia. Check out the table on harmonics and tuning
Cheers!