Super happy to be made an Ableton Certified Trainer, and join a wonderful international community of artist-educator-technologists from 56 countries. Just 8 of us from the UK were selected since 2013, so it’s a real privilege. I am of course a technophile (=nerd), but I have a particular love for Ableton Live (and Push) which – now with Max for Live – is incredibly open, flexible, and linked to diverse forms of historical and contemporary music making in composition, performance, production, and programming. I genuinely love Live and Ableton and relate to their musical ethos deeply.

A live video presentation at the fantastic 21st Century Guitar Conference “in” Lisbon, March 2021, hosted by the wonderful Amy Brandon and Rita Torres. ‘Digital Self-Sabotage’ explores we guitarists’ deep and twisted engagement with the fretboard, and how technology can expand and disrupt this bond for learning and insight.

Careful at the Rose Main Theatre, Kingston June 5 2018 2pm – This unique dance/theatre performance puts you in the care of five over-stretched nurses as they struggle to balance empathy and efficiency, compassion and clinical proficiency. Inspired by its makers’ experience of long-term hospitalization, Careful celebrates the skill, beauty and toil of professional nursing as seen through the eyes of the patient. Introduced by Professor Karen Norman, a leading expert in nursing, the performance forms part of The Art of Nursing, an annual event hosted by Kingston University and St George’s hospital.

This event is designed for students and professionals of nursing, though members of the public are very warmly welcomed to attend.

Careful was developed in collaboration with the Clinical Skills and Simulation team at Kingston University and St George’s University London. The collaboration has also led to the development of workshops designed to enhance self-awareness and non-technical skills of patient care, which now form part of the Nursing practice curriculum.

Careful is a project by Chimera, an arts company/research network dedicated to making engrossing artworks about, for and with the medical and healthcare sector. Led by Dr Alex Mermikides (Guildhall School of Music & Drama) and Dr Milton Mermikides (University of Surrey), we also create impactful events for students, researchers and the general public. Our work has been supported with funding from the Arts and Humanities Research Council and Arts Council England. www.chimeranetwork.org.

Duration 90 minutes, including introductory talk and post-show discussion. Please note that the event will be filmed for evaluation and publicity purposes. Book FREE tickets here

Here’s another classic process piece used as a ‘Push Etude’, Steve Reich’s Clapping. Even though it was written after Piano Phase, it is somewhat simpler (certainly to perform), relying on discrete rather than continuous phasing, so fits well into the discrete conceptual world of MIDI rhythm. The challenge here is to program the seminal pattern (which can be heard in triple or duple time like much of Reich’s Ewe-inspired phase pieces). You could of course play it in but I’m trying to roast my Push 2 programming chops. Duplicate the track and then shift it over in steps (you could also set global quantise appropriately and restart one clip at the appropriate metric point, but I wanted to make use of the lovely clip view now available). Unfortunately the push has little control over the fine control of offset, a shift move (as far as I can tell is always a semiquaver (1/16)) so I’ve set the Set to 6/8 rather than 6/4. I’m not sure of a more elegant way to reset the start offset other than how I did it, let me know if you can! Being an 8×8 grid (we do generally reside in the normative binary default rhythmic world like it or not), the Push represents the 12 slots over a row and a half (I’d like to be able to move the rows into 6s for example) so imagine it like this:

You can then apply the pattern to melodic material as I’ve shown later in the video. Enjoy, njoye, joyen, oyenj, yenjo, enjoy.

Ableton Push 2 and Live 10 are incredible devices, both progressive and able to integrate seminal electronic, process and generative creative practices. In order to start exploring their potential I’ve been experimenting with recreating classic works as succinctly and fluently as possible. Here’s Steve Reich’s Piano Phase using just one track and Live 10 and Push’s new melodic sequencer layout which I find hugely valuable.

In essence you can break down the classic theme into its component pitches, and reform them by pitch rather than rhythmic placement. Quick overview: Set scale on Push to E Dorian and form the patterns from above on teh 1st, 2nd, 5th, 6th and 7th degree of the scale respectively. Once you can do this it can be fun to enter them in diferent orders, add chords to each of them and of course use in your own improvisational/compositional practice.

The phasing is super simple (naive really) each dial completes a rotation so you can settle on each semiquaver confidently before moving to the next rotation. This could all be done in microtemporal MIDI (creating fewer artefacts) with M4L devices but I like the ‘in-the-box’ constraint, maximising pre-existing tools. 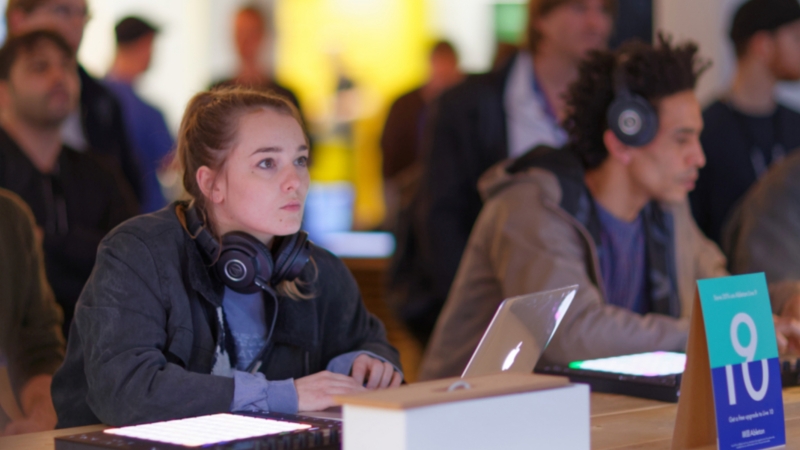 On Saturday 6th June 2015, I’ll be performing with John Williams, Gary Ryan and friends at the beautiful Shakespeare Globe in London. Among other works, we’ll be performing Phillip Houghton’s sumptuous Light on the Edge by candlelight. I’ll be providing electronics (courtesy of Ableton and one of my many MIDI controllers) and it should be rather magical, unless of course I accidentally play Chloe’s playlist of Wheels on the Bus and other hi-energy toddler classics. Digital animator (with a PhD in Chemistry) Anna Tanczos has set my composition ‘The Escher Café’ to video for live performances. Here’s an extract with animated tessellating lizards no less.

Bridget and I will be performing at 1.30pm Sunday March 30th (University of Surrey) at the launch of the International Guitar Research Centre (IGRC) run by Steve Goss and me. We’ll be performing 7 new works for classical guitar and electronics. Not the usual guitar rep. Tickets are £2 for students and £10 for the rest of us. Would be lovely to have some friends (of ours and new music) there. On the 14th October 2013, I’ll be joining the eminent musician and fellow Wodehouse character Peter Gregson at the Luton Music Club to max out on Minimalism. Details to follow, but on the programme is Terry Riley’s seminal work In C in all its heterophonic and generative gorgeousness. Rather than play it (on my guitar) traditionally with the ensemble, I thought it fun (and more interesting) to use Ableton Live (and Push) to rebuild it so it ran generatively. I’ve done a very simple version which adopt most of the instructions, any errors kindly forgive me and my future generations.

Here’s a screenshot of the resultant tapestry: And here’s the WIP for your to download in the spirit of musical democracy.

Hit scene 1 and they’ll tumble through, I’ve weighted the follow actions to have on average more repeats on shorter phrases which makes sense musically. You can intervene, urging on any stragglers and holding back any clips forging too far ahead. Actually I may need to consult a statistician as the deviation in fall rates seems (in my fallible intuition) to suggest something’s a bit skewy with the randomising process. But oh well, the variation in performances is intriguing (I’m on listen number 6 and still very happy). You can of course ride volumes, edit instruments and send out effects to your ears’ content. You can always set clip 53 to – rather than stop – return to clip 1 so the piece lasts forever, with clips lapping each other – adding another dimension to the work. If Follow Actions in Live were more sophisticated or I had time to render in Max the clips could behave more intelligently by grouping together, dropping out and changing velocity more responsively as per score instructions, but it actually works quite beautifully as is, which is a testament to the power of Riley’s concept.

Incidentally if you’d like to tweak the ‘fall rate’ – and hence the resulting approximate duration – change this number on the clips (you can select multiple), but remember that you may want longer clips with lower numbers. Again I wish there was more sophistication with follow actions, which would also allow the pulse to stop after all other clips are finished, but I await Ableton Live 17

Thanks to user Jeepee on the Ableton forum, whose patch I discovered when googling this idea, I’ve kept many of Jeepee’s clips as I like how he/she played them, but am also thinking of doing it PROPERLY in Max and crowdsourcing midi and audio clips from the interwebs when the Earth slows and there’s enough hours in the day for such mischief.

For those sensible people not in to Ableton or this sort of thing, you can hear a rendered version from this patch here:

The Dana Centre and d.café are licensed premises open only to those aged 18 or over. Most events are free. Arrive early to enjoy a wide variety of delicious food and drink in our air-conditioned d.café.

Diagnosed with Leukaemia, John was given hours to live – but survived thanks to a bone marrow donation. How can ethically sourced stem cells save lives? Experience an immersive and exploratory performance created by a survivor and his donor.

John’s disease, Acute Lymphoblastic Leukaemia, is ‘a deadly disease for which the best available therapy is only applicable to a fraction of patients and is itself potentially lethal’ (Dr Adele K. Fielding, Haematologist UCL). That therapy – a transplant of blood stem cells – is both potentially lethal and life saving. It is also miraculous, mysterious and slightly macabre.

Bloodlines conveys the science and the experience of this last chance treatment in a performance featuring a haematologist, a musical score created from blood cell counts, kaleidoscopic visual effects and dance. Join us in the Dana Cafe after the performance for a discussion with the makers: learn more about stem cells and becoming a donor and about this collaboration between artists and medical scientists.

More details about Bloodlines can be found here. This event is supported by the Arts and Humanities Research Council.

On May 9th, I’ll be playing with the fab (almost) all-Australian Orchestra Ruthless Jabiru under the directorship and baton of Kelly Lovelady.

I’ll be performing live electronics with the 18-piece ensemble, for Brett Dean’s fabulous Carlo. Which interweaves multiple fragments of renaissance composer Carlo Gesualdo’s vocal works (of which I am great admirer) among the live orchestral passages. Originally written for sampler and CD, I’m reworking the electronics for Ableton Live to be triggered via Launchpad (assuming my Push won’t reach me by then). It’s quite a tricky score and electronic fiddle but potentially very powerful.

We’ll be performing in the incredible Exhibition Hall of London’s Australia House (which you may recognise as Gringott’s Wizarding Bank).Ticketing info here. Magic. A rehearsal of the fab (& lovely) livingroominlondon ensemble playing my piece for quintet and electronics The Escher Café, A musical representation of a set of M.C. Escher engravings.

Here’s a short video of my (gorgeous) cousin Maria-Christina (Winner of the Wales International Harp Competition) on harp and electronics.